Words are like paper money. Their value depends on the source. I actually woke up one morning believing I was the first to use this phrase. A quick Google search proved otherwise.

With that said, the source of the following words carries 20+ years of experience with the development, manufacture, and technological advancement of the modern dental handpiece. Their value lies in your willingness to try new things.

If you are in the market for new handpieces, you should end your search now, because the absolute best value in the dental industry today is the “Classic” HC20KL from MK-dent Germany.

To name a handpiece “Classic” is a gamble. There are many impressive classic handpieces, created by companies that deserve the accolades. However, This classic is destined to erase the memory of all others. In addition, you may leave your electric on the shelf after experiencing the 28 Watts of Air Driven Power from the Classic HC20KL

The longevity remains to be seen, but a quick look at the turbine design will certainly calm most skeptics, and those who know that balance, carbide, and ceramic are current technology’s solution to durability. The HC20KL from MK-dent is another example of the quality we have all come to expect from a handpiece made in Germany.

Grip design is very comfortable. Easy to hold between fingers.

Compare the 28 watts of the MK-dent HC20KL to the following:

In the 5th grade, excited about the upcoming science fair, I decided to enlighten the community of Riverdale Park, Maryland to the magic of electricity and light. Imagining awards and scholarship offers, I put together an impressive circuit with power supply, switch, and incandescent bulb, all mounted neatly on a plywood surface.

The day of the fair, dressed in my best, hair slicked back, and 30 second speech memorized to perfection, a flash appears in my peripheral vision. I glance over to see a mesmerizing red pulsating light. Everyone in the school cafeteria turned exhibit hall was captivated. Inside that glass tube, we all saw the future. Neon!

Competing handpiece manufacturers must feel they are seeing the future as well, in the near silent power of the Prime Line HP21KL by MK-dent.

While MK-dent may not have discovered that energized gas atoms emit photons, they have developed one of the most efficient, powerful, and quiet air driven handpieces available. Combine some of the best stats in the torque head class, at half the cost of competitors with an unconditional 1 year warranty, and MK-dent has a home run.

Hope MK-dent doesn’t mind the reference to America’s pastime, because American dentists will surely appreciate the HP21KL made in Germany.

Compare the 25 watts of the MK-dent HP21KL to the following: 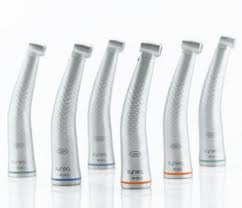 W&H Dental, now affiliated with ADEC produces some of the most highly specialized equipment in the industry. Among these W&H handpieces from W&H Dental are their line of Synea Electric Handpieces. The Synea line includes both the electric motor and various contra angles which attach to that motor, as well as a complete line of air driven W&H Handpieces.

W&H Dental Synea 1:5 Contra Angle now replaces higher speed handpieces for bulk material removal and cavity preparation due to their strong torque. The WA-99 contra angle puts power to the tip of bur you will not experience with any air driven handpiece. Torque may be applied without slowing the speed, which can top 200,000 rpm.

Look for the TA line of W&H Handpieces which offers the TA-98 Torque (large) head handpiece – our choice. Also offered are the TA-96, and 97 from W&H Dental for those looking to standard and small heads. Of course, we prefer the torque head (more power, quiet operation) as W&H Handpieces head angle is such that, even with the larger head size, all areas of the mouth can be accessed with practice. 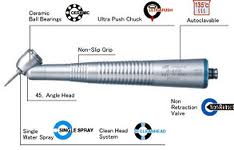 All NSK Surgical 45 degree handpieces are rock solid. All contain the excellent, very high torque, turbine encased in NSK’s cannister which literally eliminates debris and contaminants from entering head from outside sources. We all know that 45 degrees is the perfect angle for surgical applications. NSK was not the first the recognize this. However, the NSK Surgical 45 degree handpieces have perfected the application in a handpiece which will last.

Noise and vibration are near non-existent in this one. Since all NSK surgical 45 degree handpieces contain relatively the exact same turbine, you can expect quiet, smooth operation with cutting ability you will have to control closely. Sometimes its hard to tell just how strong these handpieces are in the absence of that familiar high pitched whine. 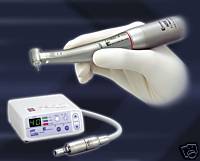 The merge of companies or corporations doesn’t typically excite us. The marriage of Sears Holdings and Kmart comes to mind. However, one product of the union between Brasseler USA and NSK America has been their ability to produce very robust electric motor combinations.

Brasseler, a perennial power house in the electric lab motor arena, has produced an awesome product for years. Enter NSK’s clinical expertise, and the product of the resulting equation is success.

The NSK NL 400 Ti-Max Brushless Electric Micromotor System is just one example of that success.

Maintaining 3 Ncm over a wide range of clinical procedures, the NSK NL 400 defines constant torque. Ncm (Newton centimeters) is a measure of force, which is more accurate when talking torque (like the amount of force needed to cause a torque wrench to click). Speed is not a factor, as with air driven highspeed handpieces. Torque remains consistant from 2 to 200K rpm.

Motor weight is 77 grams (that’s about 3 ounces for the metrically challenged). Slap on a Ti95L, 1:5 speed increasing handpiece, and you’re looking at a mere 137 grams, significantly lighter than most competitors.

The NSK NL 400 is compatible with the Ti-Max attachment series which employ ceramic bearing technology, cellular optics, 4 port spray, and clean head system, all the same solid technology which has helped push NSK air driven products to the top of the industry.

If considering the move to brushless electric technology, there is a slight learning curve, but the resultant increase in cutting efficiency of the NSK NL 400 can be worth the effort.