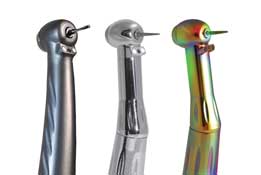 The comparison issue is raised more as the electric handpiece gains ground in clinical use. Coupled with it’s ability to incorporate attachments geared to produce speeds to 200,000+ rpm, the electric handpiece makes a strong bid for its place in the clinical arena. While air driven handpieces typically win the speed race (350,000+ rpm), another variable is introduced – Torque.

Remember, Torque is a measure of how hard something is working, and Watts tell us the rate at which the work is being done.

The average highspeed handpiece develops 16 to 17 Watts. To reach this level, it must obtain and hold it’s optimum speed. As the turbine slows, the air driven handpiece loses a portion of it’s ability to cut, as the power output of the handpiece (Watts) decreases as well.

Modern brushless electric motors have the ability to maintain constant torque over practically the entire speed range, so the power output of the handpiece (Watts) is more consistent as well. The Kavo 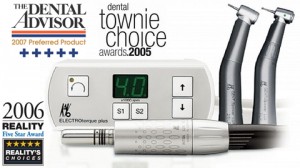 ElectroTorque brushless electric motor ranges from 20,000 to 40,000 rpm. Coupled with a speed increasing attachment, it can maintain constant torque between 27 and 200,000 rpm.

So, are we going to go out and buy all new electric setups for each operatory? The cost alone would probably preclude that. Air driven handpieces will likely maintain their place for quite some time. At less than $1000 for a good one, with no other attachments required, the cost is a little easier to swallow.

Learning to use an electric handpiece is worth the effort.

The electric handpiece has definitely come a long way, and certainly deserves it’s place in the modern practice. With a little patience, learning to use this newer technology can pay off. There is a learning curve, but not too steep. One large advantage, for the progressive practice, is a quicker patient turnaround, as cutting is a bit faster. Electrics also tend to last a little longer between repairs, which helps to offset the initial cost.